Vince Santini is trial specialist.  He was a nationally ranked trial advocate for South Texas College of Law’s Advocacy Program where he tried mock trial cases all over the nation from New York to California, representing Texas in the most esteemed competitions.  Vince earned multiple advocacy awards including a Distinguished Advocate Award in the 34th Annual National Trial Competition, Best Speaker Awards in 2007 and 2008 Dean T. Gerald Treece Summer Academy Competition, as well as Mock Trial Champion. Vince’s success in these mock trials landed him a spot in the most prestigious competition, the National Institute of Trial Advocacy’s (NITA) Tournament of Champions, made up of the top 16 law schools in the Nation.  Vince earned recognition in the Tournament of Champions as one of the best speakers and became a finalist.  Vince’s achievements in the courtroom earned him the Dean’s Student Advocacy Service Award for 2008-2009 as well as the Order of the Barrister’s Award for exhibiting excellence and high honor through the art of courtroom advocacy.

After law school, Vince was hired as an Assistant District Attorney with the Montgomery County District Attorney’s Office in Conroe, Texas.  Vince quickly rose through the ranks while distinguishing himself as one of the most sought-after trial attorneys in the office.  The District Attorney selected Vince as a Special Victim’s Unit (SVU) prosecutor where he helped children under the age of 10 who were sexually abused.  Vince’s trial skills helped send numerous pedophiles to prison for life without parole.  Because Vince was successful standing up for the most vulnerable of victims when no one else would, he was asked to speak on his novel trial techniques at the largest International Crimes Against Children Conference in Dallas Texas.  Vince’s accolades were also published in the Texas Prosecutor Journal and he was awarded the 2015 Prosecutor of the Year.

In his nine years at the District Attorney’s Office, Vince participated in approximately 75 trials, including Capital Murder, Murder, Continuous Sexual Abuse of a Child, Aggravated Sexual Assault of a Child, Aggravated Assault with a Deadly Weapon, and Burglary of a Habitation.  Vince has won cases against some of the most prominent defense attorneys in the nation.  Vince ended his career with the District Attorney’s Office as a Chief Prosecutor in the 359th and 435th District Courts where he prosecuted hundreds of felonies.

Vince Santini has earned a reputation as someone who does not back down from a trial.  He has dedicated his career to helping victims work through the worst times in their lives and fighting for them in the courtroom.

Links to some of Vince’s successes:

And now I have a new roof because I made the right decision to hire The Voss Law Firm on my insurance claim denial!Ramirez Family
Hire these guys today if you're having trouble with your insurance claim!Johnson Family
Attorney Bryan Beverly was very thorough. He was prompt in returning calls and made sure we understood all options.S. Monroe 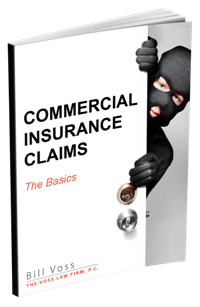 Learn the Basics of Commercial Insurance and Protect Your Business 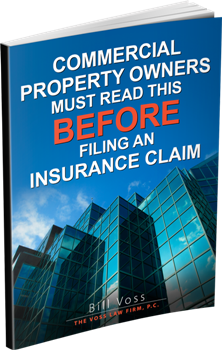 Learn About Commercial Property Insurance in Order to Protect Your Business

Are you a business owner? Read this free book, written by a Texas policyholder attorney, to help you learn all about your commercial property insurance. 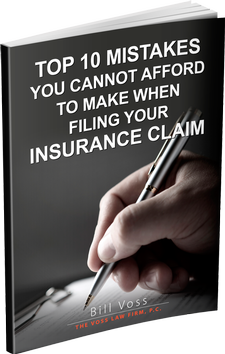