Benefits of Filing a Bad Faith Lawsuit as a Texas Homeowner

Homeowners tend to count their blessings after a fire or flood causes significant damage to their property. However, their relief may be short-lived if their insurance company doesn't hold up its end of the bargain. Attorney Bill Voss explains the benefits of filing a bad faith claim against a property damage insurer and what you need to know to get started.

What Is Insurance Bad Faith?

Insurance companies may market themselves as friends and neighbors, but they are ultimately businesses who make millions off of their customers. Businesses only profit by taking in more money than they pay out, so it's against their own interests to pay every valid claim for the full amount. To make matters worse, nearly every type of 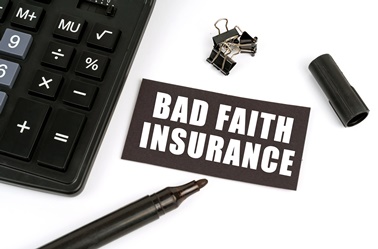 property and business venture requires some form of insurance under the law, meaning avoiding dealing with unscrupulous insurers isn't an option.

Fortunately, the law also gives policyholders the right to hold insurers accountable for unfair practices. Since policyholders are at a significant disadvantage in the claims process and when filing a lawsuit against the insurance company, the state has created "bad faith" provisions in Chapter 541 and 542 of the Texas Insurance Code. Generally, a policyholder can make a bad faith claim against an insurance company if the company knowingly engaged in unreasonable or unethical conduct.

Some common forms of bad faith include:

Damages can be extremely high in bad faith lawsuits, for a number of reasons. For one, denying payment to someone at a time when they need it most causes undue hardship for the policyholder. Also, an insurance agreement is a legal contract, and Texas laws take contract violations very seriously. In addition, the state imposes a special treble damages award in cases where companies demonstrated egregious behavior.

A bad faith claim against your homeowner's insurance company could result in:

Due to their power and influence, insurance companies are in a position to take advantage of policyholders who don't know their rights. Bad faith claims offer a chance to even the playing field between company and customer—especially since the worse the behavior of the insurance company, the greater the potential damages for the policyholder.

Get Information on Your Claim as Soon as Possible

There's a time limit on how long policyholders have to file bad faith claims, called the statute of limitations. In Texas, a lawsuit for violations of the Texas Insurance Code must be brought within two years after a cause of action. In most cases, the issuance of a denial letter is the cause of action, so you have two years from the date the claim was denied. However, it takes time to file and fully investigate these claims, so it's best to seek an attorney's input as soon as possible.

If you're tired of fighting with your insurance company, the experienced bad faith attorneys at Voss Law Firm can help you get the compensation you deserve. Fill out our contact form today to get answers to your questions, or start reading your copy of our free book, Your Essential Guide to Residential Claims.