What Hotel Owners Should Know Before Filing Fire Insurance Claims 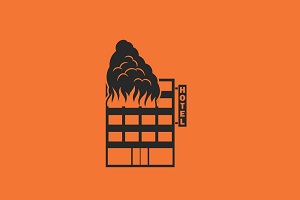 Owning a hotel or motel can be a great income generator, but it also comes with a variety of structural fire risks. It takes only a few seconds for your entire investment to go up in flames, thanks to fire sources ranging from faulty wiring to a single lit cigarette—and your insurer may not provide the extent of coverage you will need to get back on your feet. Attorney Bill Voss explains common causes and problems of these kinds of fires, and how a commercial fire claim is only as strong as the owner’s insurance policy.

While we may think of guests as being the primary reason that fires start in hotels or motels, many fires actually start for other reasons. According to a 2015 report by the National Fire Protection Association (NFPA), the leading causes of structural fires in hotels and motels include:

Hotels Cause Unique Insurance and Repair Problems for Owners

There are many things owners must do after a fire on commercial property in order to protect their patrons, their businesses, and their right to full and fair insurance payments. The actions a hospitality owner takes right after damage occurs are often costly, but they are invaluable when it comes to collecting insurance. For example, insurance coverage may be impacted due to:

In order to avoid any unpleasant surprises, it is recommended that hotel or resort owners review their insurance policies several times per year to fully understand the terms and limitations of their coverage. If your commercial enterprise was ravaged by fire and your commercial property insurance claim was denied, we can help. Fill out the form on this page today to contact the Voss Law Firm, P.C., about how to dispute an insurance denial.