Hurricane Sandy came ashore in New Jersey yesterday as a post-tropical cyclone, but the difference made little effect to New Jersey residents who were displaced by the storm. 2.4 million New Jersey households are without power today, and officials estimate that the full restoration of power will take more than eight days, spelling grim news for the households affected. It’s still too early to know the full extent of the damage that New Jersey suffered from Hurricane Sandy, but there’s no doubt that this is going to be one of the most costly storms in history for New Jersey residents. 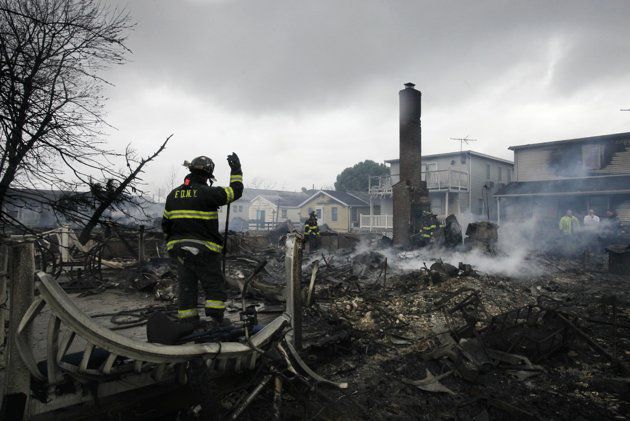 Some of the most devestating damage to New Jersey comes in the form of widespread flooding caused by the storm surge that Hurricane Sandy delivered when it came onshore. Residents of four northern New Jersey towns were inundated when a levee failed to hold back the storm surge - hundreds of residents waited out the storm at shelters while their streets and homes were flooded by the massive volume of rapidly flowing water. The Hackensack River overflowed its banks, and parts of Carlstadt have also been flooded by the storm surge. Some people in trailer parks were forced to climb onto their roofs to escape the water, and rescues from these flooded areas are still continuing today.

As if the flooding wasn’t bad enough, New Jersey also suffered substantial wind damage, and damage caused by fallen trees. Many of the power outages are caused by trees down across electrical wires, or fallen electrical poles. Walls and home facades have been ripped away, roofs damaged, and trees fallen on cars and houses throughout the region. The winds today are still too strong for much touring by helicopter, so it will be days before the full extent of the damage can be properly evaluated. When you look at all of the tree and wind damage, and the widespread nature of the damage, it’s easy to see why the utility companies estimate that it will take more than a week to restore power in some parts of the state.

As you return to your homes and begin to evaluate the damage caused by the storm, our thoughts are with you, New Jersey. Here at The Voss Law Firm, P.C., we’re working on a series of articles to help you as you move through the cleanup and damage assessment process. Our hearts go out to those who have been affected by the storm, and if we can provide any help with filing a claim or dealing with the insurance companies, please feel free to contact me - Bill Voss, Policyholder Insurance Attorney.