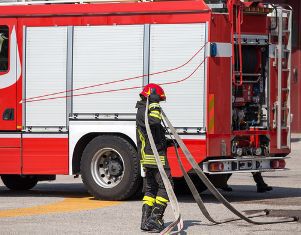 A serious fire broke out over the Second Look Antique Shop in downtown Utica, Illinois, on May 10 and left one person in the hospital with severe burns. Although the fire was largely contained to the antique store in the 100 block of Mill Street, nearby businesses were facing severe indirect damages from the fire and efforts to fight it. Officials later said that the fire was likely accidental, although an official cause has not yet been identified. The fire left destruction in the heart of Utica’s downtown that, even weeks later, remains as an ugly reminder of a major fire.

The Mother’s Day blaze caused smoke, fire, and water damage to several buildings in the area—even those that were not directly affected by the flames. Once the blaze had been controlled by firefighters, serious damages were reported at:

Skoog’s has now reopened its doors following weeks-long repair and recovery efforts at the business. However, other businesses still remain closed, and their future is uncertain. While demolition of one total-loss building is being considered, city officials and downtown businesses hope to avoid “leaving a hole” in the face of their downtown if renovation is at all possible. The building for Flutterby Junction was also gutted by the fire, and it could be weeks or months before the business reopens. It was unclear if the smoke-damaged apartments above the businesses had yet been restored. Many businesses had signs on their windows or messages on social media thanking the community for their support while they’re closed.

Fire claims can already be complicated for business owners, but investigating and settling an insurance claim for a multi-business fire can be even more challenging for policyholders. If your business has been affected by a serious blaze, or if you have been struggling for months to settle a claim through your commercial fire insurance, don’t wait to get the help you need. Getting the information and support you need with a difficult claim can make the difference between reopening your doors and facing a future of continued uncertainty.

While your claim may be difficult, getting help can be simple. You can learn more about your policyholder rights today by calling the Voss Law Firm directly at 888-614-7730, or you can request a free copy of our eye-opening book, Commercial Policyholders Must Read This Before Filing an Insurance Claim.