On Thursday, August 6, 2015, severe storms moved over Alabama and produced a tornado that caused heavy damages in an area south of Montgomery. Some businesses in the city of Troy sustained damage in the storm, and several people were hurt in a commercial roof collapse where the tornado touched down. The National Weather Service confirmed on the following morning that the storm was, in fact, a tornado, but the rating of its size and strength were not yet clear. A scientist with the National Weather Service said that it was “very rare” for tornadoes to form in the area in August. Additional heavy storms also affected other parts of the state over the weekend.

At Least Two Businesses Report Damages From Tornado in Troy

In Troy, some of the most remarkable damage included a local Walmart store and a sporting goods store. The roof of the Walmart 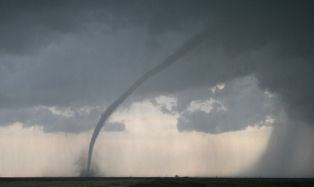 was heavily damaged and collapsed partially in the storm. According to photographs and accounts on social media sites, the inside ceilings of the store were sagging, and merchandise was scattered in the aisles. It was also reported that the storm was strong enough to overturn an 18-wheeler truck in the parking lot. A Walmart spokesman said the damage was still being assessed, but said that employees may be moved to other locations while the property is repaired. A nearby sporting goods store also sustained serious losses in the storm, losing at least one external wall.

Thankfully, the storm hit at night—just before 11 p.m.—which meant that most of the stores in the area either didn’t have many customers or were closed at the time. However, despite the reduced number of shoppers, at least six people were injured when the roof collapsed at Walmart. None of their injuries were thought to be serious or life threatening.

Need Help With a Tornado Insurance Claim for a Commercial Property?

The 2015 storm season has been very severe, leaving many businesses across the nation looking to their insurance companies in order to recover. Unfortunately, successfully setting commercial storm insurance claims isn’t always easy. If you are a business owner who has been affected by tornados, heavy rains, or high winds, don’t settle for an unfairly denied or underpaid claim. Learn more about your rights as a commercial policyholder by reading through our free book, Commercial Insurance Claims: The Basics, or call us directly at 1-888-614-7730 to discuss your concerns in detail with our experienced team.