Hurricanes and Severe Weather Totaled $306 Billion in Damages in 2017 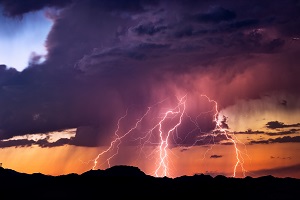 A combination of devastating hurricanes, wildfires, and other natural disasters has made 2017 the most costly U.S. disaster year that has ever been recorded, according to the National Oceanic and Atmospheric Administration. With the combination of three major hurricanes in quick succession, 2017 surpassed the previous record high disaster year 2005, when Hurricane Katrina led to $215 billion in U.S. losses. Attorney Bill Voss explores why losses were so extreme and how to prepare for an increase in disaster costs in the future.

Weather Events That Cost the U.S. Billions in 2017

The most costly adverse weather events of 2017 included:

With Harvey, Irma, and Maria now joining Hurricanes Katrina and Sandy as the five most costly U.S. hurricanes on record, hurricanes continue to be the highest single cause of weather damage nationwide. However, the record-breaking storm year shows a larger trend: the increase of costly and devastating storms due to climate change.

Although hurricanes, flooding, wildfires, and other severe weather events occur naturally, studies have detected an increase in both frequency and intensity of the events in recent years. Some researchers believe that disasters costing over one billion dollars are fast becoming the norm, but climate change intervention could help mitigate the costs and destruction of future natural disasters.

Another concern for homeowners and businesses is the rising cost of disaster insurance. Consumers in areas that are hardest hit often see higher hurricane deductibles and are likely to have claims denied in order to save the insurer money. Thousands of policyholders are often forced into bankruptcy due to denied or insufficient coverage, while others may see a decline in property value.

Are you still waiting on fair payment from an insurance company after a major storm? We can help if your insurer is attempting to deny, delay, or underpay your hurricane claim. Simply fill out the form on this page today to contact the Voss Law Firm or order a free copy of our book, Commercial Property Owners Must Read This BEFORE Filing an Insurance Claim.