Central Maine Microburst Damaged Roofs, Windows, and Trees in a Matter of Minutes

Although many residents believe a small tornado had touched down in a town in Central Maine, the National Weather Service said that the storm in Albion was actually a microburst—but that doesn’t necessarily mean that it was less damaging than a tornado. The band of severe storms hit on Tuesday, July 28, affecting multiple counties in the state, including:

The following morning, it appeared that the town of Albion was hit hardest by the storm, which developed into a microburst over the area. 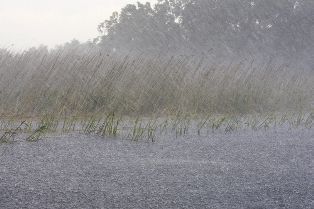 Residents reported damaged roofs, torn siding, broken windows, and other losses. Most of the damages from the storm were caused by uprooted trees, flying debris, and heavy hail. One golf course in Albion was closed following the storm due to 50 or 60 downed trees on the property. Residents of Albion reported that the microburst only took minutes to cause the destruction of their properties.

After the storms, multiple homes and businesses in Central Maine were without power, and many roads across the state were blocked by trees or missing signage.

What Is a Microburst?

A microburst takes place during a thunderstorm when an intense downdraft of sinking air affects a small area. Unlike a tornado, the air does not spin. However, the winds can still be very strong in a microburst, possibly reaching up to 150 miles per hour in severe cases. In the case of the Albion microburst, wind speeds were measured at up to 80 miles per hour—so it’s no wonder that many mistook the sudden and intense winds for a tornado. While most people are more families with tornados, microbursts and similar weather events can be just as destructive to buildings and properties.

Do You Need Help With an Insurance Claim for Microburst Damage to Your Home or Business?

Sudden storms can leave property owners facing a long road to recovery under their insurance policies. If your home or business has been affected by a severe storm, don’t settle for underpaid insurance claims and denials. You can get help with difficult claims by contacting our experienced policyholder attorneys today at 1-888-614-7730 or requesting our eye-opening book, Tricks of the Trade: How Insurance Companies Deny, Delay, Confuse, and Refuse.