Special Considerations for Retail Store Owners After a Tornado Hits

Severe storms can devastate homes and businesses for miles, and insurance is the only hope many people have of restoring their lives to normal. Texas retail businesses face unique challenges when it comes to protecting employees in a tornado and preventing losses from spiraling out of control. Attorney Bill Voss evaluates the types of damage retail stores have suffered from previous storms and offers tips to protect retail businesses before the next tornado strikes.

Researchers have discovered serious tornado risks for large warehouse stores, such as Wal-Mart and Home Depot. Although these structures are required by building codes to sustain winds 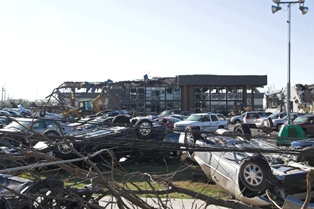 up to 90 mph, they are overwhelmingly likely to buckle and collapse during a tornado. The larger a structure is, the more vulnerable it is to roof collapse, flattening the building and injuring or killing any occupants.

Large box retail locations are also at risk due to their:

Making a Tornado Claim for Damage to Your Retail Store

Losses from major weather events not only impact the physical structure of your business, but also the income you will generate in the months and even years to come. The first thing you should do is gather all of your policy documents together and notify each carrier of your intent to file a claim. Next, you will have to secure the property so that nobody gets hurt while you are waiting for the insurer to issue payment.

After that, there are a few more vital steps that can protect your claim, such as:

If you are having trouble getting an insurer to pay for tornado damage to your business, we can help you get the maximum amount of coverage allowed under your policy. Simply fill out the form on this page today to contact an insurance attorney at the Voss Law Firm or order a free copy of our book, Commercial Property Owners Must Read This BEFORE Filing an Insurance Claim.