The light of morning has some residents scrambling to assess the damage caused to their homes, businesses and car in the North Texas area and Parts of Arkansas 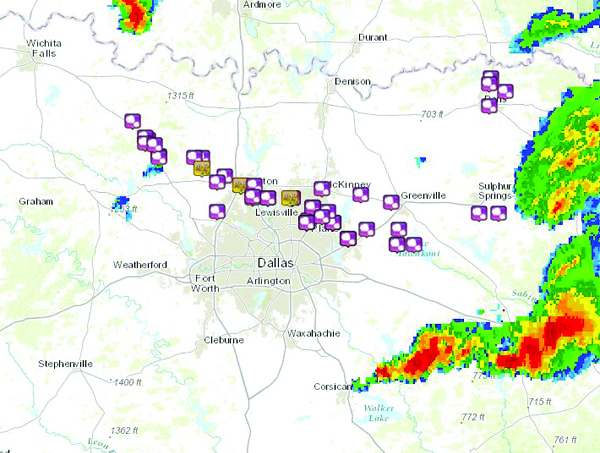 Damaging winds and hail rained destruction on North Texas and parts of Arkansas late Monday evening and is part of the destructive system moving through the Gulf states and has the potential to bring more Thunder Storm and even Tornadoes.

From the National Weather Service app, in which people can report the weather in their area, many along the North Dallas area reported hail. Warnings were issued among Collin, Dallas, Kaufman and Hunt counties. In hard hit Bain, wind gusts reached up to 60mph and saw plenty of wind-driven hail causing damage to windows for cars, home and businesses.
In Texarkana, Arkansas, residents experienced the destructive forces of the storms winds, which caused trees to uproot and there were even reports of them falling atop homes.

Hundreds of Texans took to social media to document the damaging effects and aftermath of the powerful system that swept through North Texas. The Spring storms blasted through some areas, such as hard-hit Wylie, Texas. Here residents dealt with strong winds, baseball sized hail and more than 10,000 lost power.

"I've never been through anything like this before," reports Wylie resident Jim Burton, who experienced first hand the damaging effects of the wind-powered hail.

North Texans weren't the only one's to have felt the devastating effects of the storm; residents of Arkansas dealt with the equally brutal forces and had to content with another deadly side-effect of the storm: fire.

In the town of El Dorado, lightning is believed to be the culprit behind the church fire that blazed out of control Monday afternoon. Thankfully no injuries were confirmed and residents are asked to stay clear of the area. The blaze was one of many fires reported in Union County that afternoon.

In Texarkana, Arkansas, strong winds sent trees crashing into homes. Ben Story and his wife narrowly escaped a large tree that crashed through their home living room, "I heard hail and just said 'Oh Lord' just protect us from those trees." Story and his wife were unharmed by the falling tree, but their home is completely damaged.

The storm system wrecked havoc among Oklahoma and parts of Alabama where an elderly man was said to have been struck by lightning while sitting on his porch.

The Voss Law Firm remains committed to representing those who have been denied by their insurance providers. Our clients, after having suffered through terrible events such as the North Texas and Arkansas area are experiencing now, were denied the necessary funds they needed to rebuild their homes and businesses. Our dedicated team fought for them and won them the money they needed as well as the piece of mind that knowing they don't have to worry about rebuilding bring. If you'd like to speak to a Voss Law Firm representative, or learn more about our area of expertise contact us today.