Storm Surge Losses on Commercial Properties After a Hurricane

When Hurricane Matthew left damages in multiple states in 2016, some businesses in those affected coastal regions found out that either some or all their property losses would not be covered through their standard commercial insurance policies. Why? Because storm surge—although often a significant factor in hurricane losses—is treated as a flooding event and typically covered under the commercial property’s flood insurance policy instead.

Attorney Bill Voss has worked with many businesses and corporations after large-scale hurricane losses, and he wants to offer a reminder that reviewing existing flood insurance coverage should always be a part of planning for and mitigating potential hurricane risks for business properties.

What Is Storm Surge? 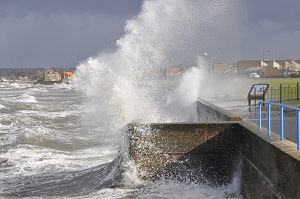 “Storm surge” is an abnormal increase in coastal water levels caused by a major storm or hurricane. High winds from the storm can push water inland, sometimes causing water levels to rise by 15 feet or more. The rising storm surge may also be compounded by high tides, heavy rainfall, and waves, especially in slow-moving storms or areas that have already been saturated with wet weather.

In a Category 4 hurricane or stronger, every area along on the Gulf of Mexico and East Coast of the United States is potentially vulnerable to storm surge. However, a hurricane doesn’t have to be that strong to create severe storm surge, and it’s not only businesses on the coast that need to be concerned. The National Oceanic and Atmospheric Administration (NOAA) offers the example that, even after Hurricane Katrina had been downgraded to Category 3, the storm surge rose to 28 feet with the storm’s landfall. In Hurricane Ike, with a 20-foot rise, storm surge affected some communities in Texas and Louisiana up to 30 miles inland. In hurricanes, even areas not heavily affected by high winds can suffer catastrophic damages with the ensuing storm surge.

Although the cost of repairing storm surge damage can far exceed the cost of repairing damage from wind and debris in some named storms, the flooding from the rising waters that follow a hurricane is unlikely to be covered by typical commercial hurricane insurance policies. Businesses would instead file claims for their flood-related damages through their flood insurance company, while filing other hurricane-related claims through their commercial property insurance company.

The good news is that storm surge losses are typically covered by commercial flood insurance policies, and commercial policyholders should be able to recover compensation for structural damages, building contents, cleaning and mold prevention, and some equipment. The bad news is that, in large-scale losses, sorting out the difference between “hurricane” claims and “flood” claims can be both frustrating and time consuming.

Get Help With Denied, Delayed, or Underpaid Hurricane and Storm Surge Claims

Even an inch of water on the floor can spell disaster for large commercial and industrial sites, and many structures are swept away or totaled in the severe flooding that follows a hurricane. Storm surge claims for large businesses are often extremely costly, and their claims are often additionally complicated by the many layers of specialized coverage they typically carry, disagreements about which policy covers certain losses, and insurance companies attempting to mitigate their own losses after a hurricane.

Although some businesses are able to resolve their hurricane insurance claims without additional challenges, some commercial policyholders must take further action to fight unfair delays, denial, and underpayments. If you are considering appealing a decision from your commercial hurricane insurance company, or if you need legal guidance to resolve a large-loss claim related to storm surge, call our experienced insurance claim attorneys today at 1-888-614-7730. You may also find it helpful to request a free copy of our book, Commercial Insurance Claims: The Basics.