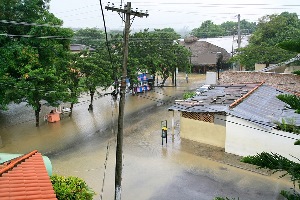 Hurricane Matthew did not officially make landfall in Florida as originally feared, but it still left a swath of destruction as it hovered close to the East Coast and moved north. Although many people are thankful that the storm did not end up moving closer inland sooner, residents in five states were affected by the dangerous storm and its related severe flooding. At least 34 people have been killed, including several who had medical emergencies during the storm while response services were unavailable. The American Red Cross opened 13,400 shelters in the five U.S. states affected by Matthew, and the organization and other emergency services are continuing to assist residents who have been displaced or need continuing aid.

Now that Matthew has dissipated, here is an overview of the storm’s effect in the United States.

At least 1.5 million Florida residents were under evacuation orders as Matthew initially threatened the state on Thursday, October 6, and Governor Rick Scott later said that the state was “blessed” that the storm stayed as far off the coast as it did. However, even though Matthew did not make a direct hit on Florida, at least a million residents were affected and without electric power. Storm surges caused widespread flooding along the Atlantic coast of the state, and Brevard County lost approximately one million cubic yards of sand from its beaches. Footage of the storm from news sources and social media users showed strong winds, uprooted trees, driving rains, and damage to homes and properties across affected areas.

Georgia was spared the worst of Hurricane Matthew, but many residents in the state were still affected by flooding, road closures, and power outages. St. Simons and Jekyll Islands experienced a severe storm-surge event, with a reported nine feet of water with 25-foot waves. Some experts called the severe storm surge a “1 in 500 year” event.

Matthew made its first landfall in South Carolina on Saturday, October 8, making it the first hurricane to make landfall in the state since 2004. Piers in the Myrtle Beach area were destroyed, and residents near Charleston faced extremely severe flooding, a six-foot storm surge, and many downed trees. Thankfully, initial reports from the governor indicated that property damage was at least somewhat limited compared to the destructive potential of Matthew, although many home and businesses in the state still suffered losses.

In North Carolina, flooding remains severe in the aftermath of Matthew. More than 880 residents have been rescued from life-threatening floodwaters, and 760,000 are still experiencing power outages related to the storm. Up to 16 inches of rain was dropped on some areas, and some rivers weren’t estimated to peak until Tuesday, October 11, or later. Some homes were completely destroyed by floodwaters, and helicopters and rescue boats were deployed to help at least 1,500 people affected by a levee breach in Lumberton. Some residents were trapped on their rooftops while awaiting rescue in Lumberton, and waters were reported to be knee-deep and still rising in other areas of the state.

Matthew brought heavy rains and flash flooding to Virginia, and downed trees made some roads impassable. Thirty-seven thousand residents were still without power as of Tuesday afternoon, and the Department of Transportation has reported a large sinkhole that has closed Route 58 in Pittsylvania County.

Stay Safe as Cleanup and Recovery From Hurricane Matthew Get Underway

As cleanup commences, make sure you do not return to your property until it is safe to do so, and avoid potential dangers like downed power lines. You should also never attempt to drive through flood waters on the road, even if the water appears to be shallow or still. For help finding an emergency shelter or disaster aid, you can visit the American Red Cross website or call its toll-free number at 1-800-768-8048.

If you have questions about an insurance claim related to Hurricane Matthew or how to get help with your property losses while you are displaced, the Voss Law Firm would be happy to answer your questions and review your situation—just call 1-888-614-7730 to get started.