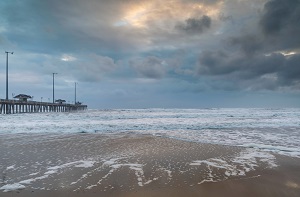 Hurricane Hermine, the fourth hurricane of the 2016 season, made landfall along the Florida coast on September 2, 2016, making it the first hurricane to hit the state in since Hurricane Wilma 11 years ago. Schools, businesses, and government offices were closed preceding the storm, and approximately 500,000 people in the state were under warnings as Hermine moved closer to the coast. Hurricane Hermine hit first in St. Marks, Florida, before moving through northern Florida and the Panhandle. The storm also affected residents and businesses in Georgia and the Carolinas, as well as many others along the East Coast.

Strong peak winds of up to 80 miles per hour were recorded, making Hermine a Category 1 hurricane. More than 20 inches of rain dropped on some areas, even as Hermine was downgraded to a tropical storm, and the storm surge topped six to nine feet along the coast. Tens of thousands of Florida residents lost power, and some had to evacuate their homes amid rising flood waters. Many homes and businesses sustained direct damage from the storm or were flooded in the aftermath, and the losses added up fast—even taking some residents by surprise despite warnings and closures.

As the storm continued to move north, pictures of Hermine’s wrath posted on Facebook, Twitter, news sites, and across the Web showed homes filled with water, flooded cars, scattered debris, and damage to exteriors and roofs. Initial flash estimates of the costs of Hermine’s damage placed the total potential economic impact of the storm at around one billion dollars, and more than 50,000 insurance claims are expected to be filed in the weeks and months to come. Losses related to homes and residential properties, as well as cars and vehicles, are likely to make up the bulk of the insurance claims submitted.

According to some experts, part of the costliness of Hermine compared to historical storms may be tied to key differences between the types of properties in different parts of the state. Properties in northern Florida may be more vulnerable to hurricane damages than properties in central Florida and south of Tampa. Research from at least one risk-management company shows that buildings along the Panhandle and northwest coast are often constructed of wood and aren’t necessarily designed to sustain higher winds, unlike stone-constructed buildings further south.

The addition of more heavily wooded areas also makes tree-fall damage more likely in north Florida. The increase in Florida’s population over the last few years, the proximity to the Labor Day holiday, and the length of time since the last hurricane to make landfall in the state are some other issues that have been identified as contributing to the cost and effect of the storm.

If you have been affected by Hurricane Hermine and expect to file an insurance claim, make sure you are prepared. There can be a lot of confusion about what is and isn’t covered by your insurance policy after a major storm or weather event, and underpayments and delays are surprisingly common. If you have questions about how the insurance company is handling your claim, or if you believe your Hurricane Hermine claim has been unfairly denied or underpaid, we encourage you to reach out to the experienced policyholder attorneys with the Voss Law Firm today at 1-888-614-7730. We have many years of experience helping policyholders around the world exercise their rights and fight “bad faith” delays, denials, and underpayments from their insurers, and we would be happy to talk with you about your concerns.