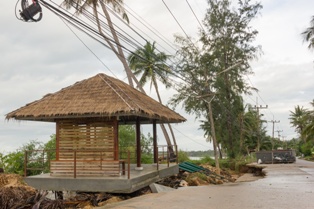 Hawaiians are reeling after Hurricane Lane lashed the state with winds of up to 60 miles per hour and rainfall that destroyed roads, homes, and businesses. The storm dumped over four feet of rain in just three days, causing flash floods that forced evacuations—even as the storm departed the state. Attorney Bill Voss examines the damage after this severe storm and advises victims to file their insurance claims sooner rather than later.

Hurricane Lane, which has been classified as a Category 5 tropical storm by the National Weather Service, slowed as it approached the Island of Hawaii on August 22, 2018. According to the National Weather Service, residents experienced the wettest three-day period on record from Wednesday to Friday, achieving the fourth-highest rainfall from a hurricane to hit the United States since 1950.

Fortunately, no casualties have been reported. However, the storm has caused extensive damage to the Big Island, including:

Owners whose homes or businesses have been damaged by Hurricane Lane are advised to file insurance claims as quickly as possible, since there will likely be a backlog of claims following the storm. Residents who have suffered total losses may be reimbursed for their temporary living expenses, property damage, and other costs through hurricane insurance, while those who are not covered under a standard insurance policy may be able to recover under the National Flood Insurance Program (NFIP) or qualify for federal assistance.

If you or someone you love has been affected by Hurricane Lane, our attorneys can work to get you full and fair payment from your insurance provider. Simply fill out the form on this page today to contact an insurance attorney at the Voss Law Firm or order a free copy of our book, Commercial Property Owners Must Read This BEFORE Filing an Insurance Claim.