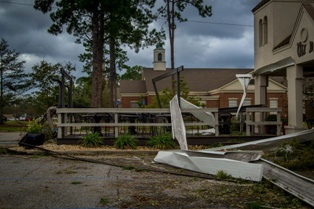 After a hurricane strikes your business, the exact cause of the damage is probably the furthest thing from your mind. However, many commercial insurance providers are unwilling to pay for damage resulting from multiple causes of loss, especially if some perils are covered and some are not. Attorney Bill Voss explores the doctrine of concurrent causation and how to get the coverage you are entitled to after a combination of perils damage your property.

Concurrent causation is the legal term for when damage is the result of two or more causes, but one (or more) causes are not covered by the policy. The damage-causing events can occur at the same time or in succession, but generally occur due to one overarching event (such as a storm or natural disaster). For example, high winds may send objects flying and break windows, allowing rain to enter the structure and cause water damage.

State courts differ on whether or not to provide full payment for multiple causes of loss in concurrent causation cases. In the past, Texas courts have held that policyholders are entitled to recover only that portion of the damage caused solely by a covered peril. However, there are often disputes about which peril caused the damage. Depending on the details of the claim, a policyholder may collect payment for the covered portion of damage only, the covered and non-covered damages, or the claim may be denied (if the loss is determined to be caused primarily by the non-covered event).

The best way to protect against concurrent causation disputes is to:

If you are struggling to recover after a hurricane, our attorneys can work to get full and fair payment from your commercial insurance carrier. Simply fill out the form on this page today to contact an insurance attorney at the Voss Law Firm or order a free copy of our book, Commercial Property Owners Must Read This BEFORE Filing an Insurance Claim.