Country Club Villas, a large condominium complex in an unincorporated area of Arapahoe County near Denver, was severely 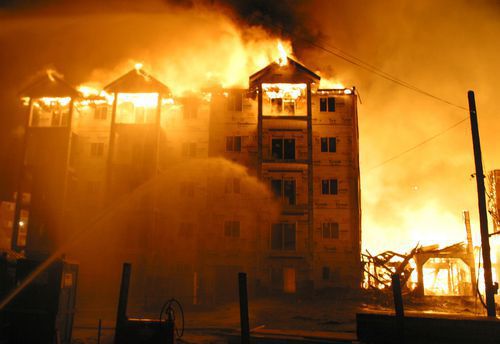 damaged in a fire that broke out on Wednesday, September 16th. According to The Denver Post, 50 residents of the complex were displaced by the damage, and 17 people reported injuries. The severe blaze and heavy smoke made escape and rescue difficult, and many people had to jump from windows or climb down ladders to get to safety. Six of the injured people were transported to a local hospital by ambulance. Thankfully, no fatalities were reported in connection with the blaze.

Firefighters from both Denver and Aurora responded to fight the fire, which took about 15 minutes to get under control. Responders remained at the site for another two hours to fight “hot spots.”

Although the building reportedly met applicable county fire codes, it was not outfitted with a sprinkler system that might help control a blaze. Unlike new buildings, some older buildings in Arapahoe County are not required to install new sprinkler systems. Unfortunately, without sprinklers in place, a fire can spread much more quickly through a building. The Fire Chief for the Cunningham Fire Protection District said that a similar blaze had also forced residents to jump from windows of the same complex 20 years ago. This time, the fire appeared to have started in an individual unit, but the cause of the blaze was still under investigation.

Displaced residents were staying with friends, at motels, or at a local church after the fire, but it could be quite some time until they are able to return to their homes. Some were able to return long enough to collect some belongings that following day, but the heat, smoke, and fire left some units heavily damaged and uninhabitable until repairs are made.

Condominium fires can leave a complicated aftermath for policyholders, especially when the fire is very severe or the cause is unclear. If you have questions about what to expect from the insurance claims process, you can get better informed about your rights today by requesting a free copy of our helpful guide, Top 10 Mistakes You Cannot Afford to Make When Filing Your Insurance Claim. This guide explains more about your rights, what happens next, and what to do if you’re struggling to resolve a claim.