A powerful storm hit the city of Radcliffe, Iowa, on August 9th, and a local church was among the numerous properties severely damaged as a result. Although the storm did not produce a tornado, the high winds that accompanied it were responsible for severe property damage, downed trees, and downed power lines throughout Hardin County. Fortunately, despite the widespread property damage, officials say there were no reports of serious injuries from the storm.

Pastor With Damaged Church Thankful No One Was Hurt

According to the reports from Radcliffe, there was very little warning about the severe weather ahead of time. As a result, the 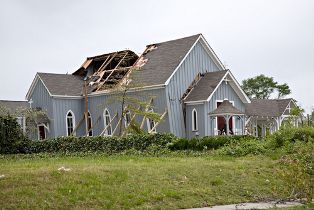 storm apparently took both residents and emergency responders by surprise. On the following morning, Reverend Michael Rolfe was saddened by the destruction. He said that Our Savior’s Lutheran Church had lost its entire roof in the back, as well as the cross from the top of the church’s steeple. He also said that he had last heard that at least a hundred other buildings in Radcliffe had also suffered losses in the storm. However, the Reverend was able to see the “silver lining” in the devastation, saying that “the best thing about this is simple; buildings and trees can be replaced, people can’t.”

In the course of the short storm, the roof of the church was reportedly torn off in the violent winds and sent flying, landing on a neighboring home. A nearby school also suffered roof damage from the windstorm. Other damages reported in town included tree-damaged roofs, power outages, blocked roads, damaged siding, and “flattened” vehicles. The severity of the losses left many residents stunned, as initial reports say that the high winds only lasted five or ten minutes in total.

Whether you are responsible for a church, a home, or a business, you hope that your insurance coverage will be enough to make up for your losses in a serious storm. If you suspect that your roof claim has been underpaid, or if you are concerned that the insurance company isn’t treating you fairly, call 1-888-614-7730 to talk with us about your circumstances. Our experienced policyholder attorneys have helped businesses, churches, homeowners, and schools assert their rights and get what they deserve from difficult storm claims.