After an already intense season of severe storms and flooding, Texas saw more rain and wind as Tropical Storm Bill made landfall on June 16. The storm moved over the state for several days, eventually being downgraded to a tropical depression, before continuing its path into other states. It was the second storm to make landfall in the 2015 hurricane season.

Although it initially looked like Houston could end up directly in the path of the storm, a few last-minute changes meant that the city avoided the worst from Bill. The storm ended up moving west by about 50 miles and remaining off the coast for hours longer than predicted, which was good news for Houston. The city saw weather similar to a severe thunderstorm, although it lasted several days. In all, it was estimated that Houston saw about one to three inches of rainfall total.

Other Areas in Texas Hit Hard With Wind and Rain

Although Houston’s experience of Tropical Storm Bill was lighter than expected, other areas in the state didn’t fare quite as well. Areas 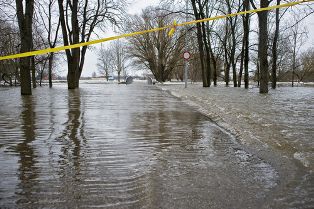 to the east and west of Houston were hit with more than a foot of rain from Bill. The West Mustang Creek, Lavaca River, and Brazos River rose with the influx of heavy rains, shutting down a stretch of Highway 59 and bringing waters back up again after the round of severe Memorial Day storms just a few weeks earlier. High winds were reported from oil rigs off the coast, with a 66-mph gust near Port O’Connor. Storm surge affected areas along the Upper Texas coast, and areas south of Matagorda were under a foot of floodwaters. Debris from the storm left Highway 87 closed between Gilchrist and Highway 124. Standing water was reported in residential yards in Galveston County, and a flash-flood emergency was issued for Alice and Kirbyville/Buna.

While the flooding, winds, and storm surge caused property damage and destruction in areas already hit hard this season, the storm avoided many high-population areas that were preparing for the worst—making the course of Tropical Storm Bill thankfully less memorable than it could have been.

Having Trouble With an Insurance Claim for Damage From Tropical Storm Bill?

After large-scale weather events, homeowners and businesses can struggle to get what they need from their insurance claims for losses. If you are having trouble making sense of your claim, don’t hesitate to contact the experienced policyholder attorneys with the Voss Law Firm today at 888-614-7730 for help.