Hurricane Florence Expected to Be an Extremely Dangerous Storm

Subscribeto our newsletters
Posted on Sep 11, 2018

As Hurricane Florence bears down on the Mid-Atlantic coast, residents are advised to obey evacuation orders and prepare for what could be the worst storm to hit the coast in decades. While fears of property damage may be at the forefront of your mind, insurance claim attorney Bill Voss urges you to put your safety and that of your loved ones first. If you live in the hurricane watch area, which as of Tuesday afternoon stretches along the Atlantic Coast from Edisto Beach, South Carolina, to the North Carolina-Virginia border, it’s time to take action.

Over 1 Million Residents Under Evacuation Order

Florence is currently a dangerous Category 4 hurricane, with maximum sustained winds clocked at 130 miles per hour. Mandatory evacuation orders have been issued for most of the South Carolina coast and parts of North Carolina. If you are under a mandatory evacuation, it is vital that you heed the order as early as possible and follow directions for evacuation. The U.S. Department of Homeland Security provides the following guidelines for evacuation: 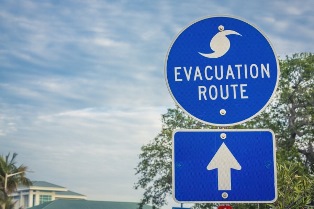 Despite advanced warning and even visits from emergency personnel, there are always those who choose to stay behind. For some, it’s not a choice. Fear, lack of transportation, medical issues, and immobility keep many people from fleeing dangerous hurricane conditions. The Centers for Disease Control and Prevention (CDC) offers the following advice for those who decide to wait out a storm like Florence:

The Worst Will Not Be Over Anytime Soon

The storm is predicted to make landfall late Thursday night or early Friday morning, most likely in the Carolinas. In addition to high winds, hurricanes bring a risk of flooding. The National Hurricane Center warns that Florence presents three dangers:

Due to the nature of this particular storm, it is expected to produce flooding that could affect residents as far inland as Ohio and Kentucky for days following landfall. As we learned from Hurricane Katrina in 2005, it is often the after-effects of a hurricane that cause the most damage. Continued flooding, power outages, homelessness, lack of drinking water, and other serious concerns can plague residents long after the winds have died down.

Once the storm is over, your problems may be just beginning. Recovering from a major storm is not easy, and difficulties with the insurance company can keep you from being able to rebuild or move on. If you need help with any hurricane damage insurance claim for your home or business following Hurricane Florence, reach out to the Voss Law Firm at 1-888-991-3212.