Mario Lopez Sues Insurer Over Flood Damage to His Home

Subscribeto our newsletters
Posted on Jul 11, 2017 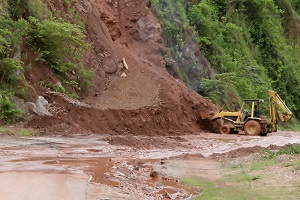 Mario Lopez, host of the entertainment show Extra, is suing his insurance company for refusing to pay for flood and wind damage to his mansion in Glendale, according to a lawsuit filed June 23 in L.A. Superior Court. The 43-year-old and his wife Courtney Mazza continue to live in the $2.6M Spanish-style villa—which was built in 1929 and was purchased by the former Saved by the Bell star in 2010 for $1.94M—with their two children while the case is being resolved.

Lopez was one many homeowners whose homes were damaged when heavy rains and windstorms swept through California in January. Lopez shared pictures and video online showing the devastation to his backyard, which appeared to be muddy and bare after a retaining wall slid from the hillside onto the street below. The crumbling wall sheared off trees, plants, terracing, and steps, causing over ten thousands of dollars in damages.

According to the suit, Lopez gave New Jersey-based Federal Insurance Company timely notice of the damage to his property, and performed all necessary actions to secure fair payment for the damages under the limits of his Deluxe House Coverage policy. Court documents allege that a representative from Federal visited the property after the claim was made, and that the representative asked Lopez’s general contractor to remove debris on the hillside in order for the insurer to investigate the property.

The suit states that the Lopez family was not aware that Federal would not pay for the general contractor to perform the requested cleanup work, and that the family could not proceed in their claim unless the cleanup was complete. Consultants employed by Federal then performed an investigation of the damage. On March 2, Lopez received a letter from Federal denying coverage for any of the damages sustained to his home.

After the claim was denied, Lopez employed an independent structural engineer to examine the damage and give a written assessment. The engineer’s report determined the cause of the damage to be trees rooted in a retaining wall that had been blown over by forceful winds, pushing the retaining wall outward and causing collapse. The engineer’s report was conveyed to Federal, but the company did not reverse its decision, relying on the judgment and evidence of its own investigators.

Documents filed in the suit indicate that Federal left Lopez and his family with no choice but to pay for their own damages, all while suffering the loss of use of a significant portion of their home. The plaintiffs are seeking an undetermined amount of damages as well as attorney fees that will exceed $25,000.

If your insurance provider is refusing to cover the damage to your home, our skilled commercial insurance attorneys can help you collect the full limits of your policy. Fill out the form on this page today to contact the Voss Law Firm, or order a free copy of our book, Commercial Property Owners Must Read This BEFORE Filing an Insurance Claim.