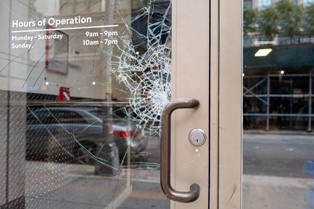 Our insurance litigation attorneys have seen a wide range of insurance claims, but those involving theft or burglary are particularly devastating for owners. In order to help owners get the insurance payments they need to move on, Attorney Bill Voss offers key information on the next steps after theft or vandalism occurs in your place of business.

The Difference Between Vandalism and Theft (and Why it Matters)

Many standard commercial property insurance policies will include coverage for vandalism, but not theft. Vandalism—the intentional and malicious damage or destruction of property—is often much less expensive than the theft of expensive computers and inventory.

One of the biggest problems with theft or vandalism claims is the insurer’s reluctance to cover damages due to the cause of the loss. Here are a few examples to illustrate how the distinction between theft and vandalism can complicate a claim:

Your Risk of Theft and Vandalism Can Affect Your Coverage

As you may imagine, insurers are keen to limit the amount of coverage provided for theft losses. Insurance providers may require certain assurances from property owners when it comes to minimizing the risk of theft or burglary, such as the installation of surveillance and security devices, proper lighting, and adequate locks. Even with these precautions, owners may require higher coverage limits or special deductibles to contain theft losses.

A commercial property may be at higher risk of burglary losses due to:

Even if an insurer is willing to insure against theft and vandalism, the insurance company may place a variety of limits or exclusions on these claims in order to minimize the scope of coverage. Owners are often underpaid for theft and vandalism claims simply because they don’t fully understand the terms of their property damage insurance policies.

For example, claims are often denied or underpaid because the commercial policyholder:

What to Do Immediately After Theft or Vandalism Is Discovered

The most important step to take after you have discovered theft or vandalism on your property is to call the police. A police report is invaluable to your claim, and insurers may outright deny coverage without it.

Once you have obtained a copy of the police report for your records, you should:

If your insurer is refusing to pay for damages, we can help. Simply fill out the form on this page today to contact an insurance attorney at the Voss Law Firm or order a free copy of our book, Commercial Property Owners Must Read This BEFORE Filing an Insurance Claim.