When a serious storm affects a community, local governments have a lot of work to do in the days and months that follow, and that has certainly been true in parts of the South that have been hit hard by the 2015 storm season. In Alabama, a month after a July 15 storm produced a tornado that affected the cities of Sheffield and Tuscumbia, the communities are still struggling to clean up and get back to normal.

Sheffield Keeping Busy With the Aftermath of July Tornado

Although the tornado that hit Sheffield was rated an EF-1 by the National Weather Service, and residents say that the tornadic 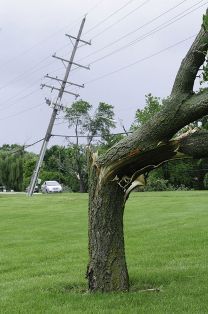 winds lasted less than a minute, the storm left extensive destruction in Sheffield. Multiple city buildings were damaged, and the damage to just the utility structure alone has been estimated at approximately $300,000. While there is still a long way to go on the road to recovery, the city and public services have made some major headway in the month since the storm, including:

Along with the city’s efforts, homes and business owners throughout the area have also been busy dealing with roof damage, uprooted trees, and structural damage from the destructive winds.

Still More to Be Done

While some buildings around the city are still covered with blue tarps or awaiting debris removal, crews are still actively working on getting the city up and running. Sheffield Utilities is currently working on trimming damaged trees around power lines, and the city hopes brush collection will soon be back to normal. Although it may seem hard to believe that a few minutes of wind could leave a month’s worth of cleanup, District 3 Councilman Steve Nix is thankful for the hard work everyone has been putting into the recovery:

“All our employees have chipped in to help — police, fire, street and sanitation, utility department guys, you name it,” Nix said. “Every employee in the city of Sheffield really stepped up and got our town rolling again. And we’re not finished. Our guys worked extremely hard to be at the point we’re at right now.”

Recovery from a storm isn’t always as easy as it should—even for the governments and public services that communities depend on. For help with your questions about denied, delayed, or underpaid insurance claims for local governments, don’t hesitate to reach out to our legal team at 1-888-614-7730 for answers.