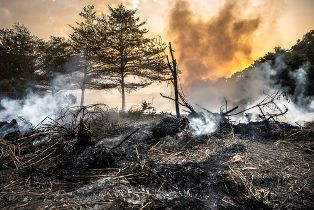 In many parts of the United States, current drought conditions and hot weather have created a huge risk for wildfires. Some experts have predicted that 2015 may end up being a record-setting year for these blazes, and a brutal start to the season lends weight to the prediction. As of the end of June this year, difficult-to-control wildfires have already impacted many homes, businesses, and communities. Right now, many western states are battling dangerous wildfires, including:

While recent heavy rains in Texas have reduced the potential for wildfires, other states can’t count on a break. According to predictions, many states already affected by raging wildfires can expect more of the same dry, hot, and windy weather as the summer wears on.

The 2015 wildfire season still has many weeks to go, and many more homes and businesses could be threatened in the coming months. If you live in a dry or fire-prone area, make sure you’re prepared for the worst. For more information about current weather events and tips for policyholders of all kinds, connect with the Voss Law Firm on Facebook—or give us a call directly at 1-888-614-7730 if you need help with a difficult claim now.