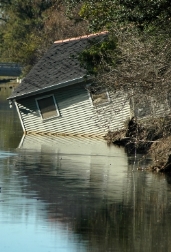 At least 13 people lost their lives, and many thousands more lost their homes, in a destructive rash of flooding along the Gulf Coast in mid-August. The flooding was triggered by very heavy rainfall that rapidly dropped nearly two feet of precipitation on some areas over a 24-hour period. The areas in and around Baton Rouge were some of the hardest hit, but damages were reported in numerous Louisiana parishes, as well as several other states.

Recovery and relief efforts have begun, and the Washington Post reports that 20 parishes in Louisiana have now been included in a federal disaster declaration by President Obama. However, a lot still remains to be done. The Red Cross vice president for disaster services operations has said that the flooding is “worst natural disaster to strike the United States since Superstorm Sandy.”

When widespread flooding hits a state, especially when the damage is as severe as what has been reported in Louisiana, relief and recovery are the most immediate priorities. Unfortunately, although many homeowners and businesses are currently depending on their insurers for help, the response from insurance companies can be delayed as their people and systems become overwhelmed with claims. If you have been affected by the flooding disaster in Louisiana, here are some tips that can help you get organized and get started on recovery.

If you haven’t been able to access your property since the flooding, you should at least attempt to notify your insurance company that you may have been affected. Although the process can be overwhelming when you’ve lost so much, the steps you take now can go a long way toward helping you resolve your insurance claim, even if it takes time.

Not sure what to do next? The Insurance Information Institute has released some helpful tips for the victims of the recent flooding, including:

Recovering from a major flood is difficult, and problems with the insurance company can keep you from being able to move on with your life and your claim. If you need help with a flood insurance claim for your home or business, don’t hesitate to reach out to the Voss Law Firm at 1-888-614-7730.