Over the weekend, atleast 17 tornadoes were reported to have touched down through parts of Texas, Oklahoma, and Arkansas. The areas in Texas that were impacted the most include Lamar County, Laredo, Miller Grove, Paris, Lindale, Waxahachie, Denton, Farmersville, Longview, Mc Kinney, Lakeway, Frisco, and Athens Texas. Teams are assessing the damage and helping in cleanup operations. Lamar County Judge Brandon Bell declared an official disaster in the area, a procedural step toward obtaining federal assistance and funding. His declaration said that “at least two dozen people were injured around the county,” the local Paris News publication and the Associated Press reported. The Attorneys at The Voss Law Firm stand ready to help those affected by these disasters, and any insurance claims that may be denied, delayed, or underpaid.

Tornadoes are one of the most destructive weather phenomena on Earth. They can form in a matter of minutes, and their high winds can easily 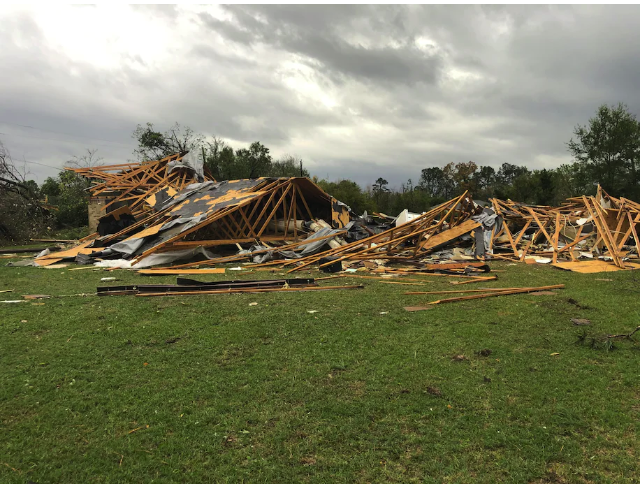 uproot trees, damage houses, and injure or kill people. The tornadoes that struck Texas on the weekend of November 4th 2022 were no exception. These tornadoes formed along a cold front/dryline—the boundary between cool, dry air from the northwest and warm, humid air from the Gulf of Mexico. This clash of air masses created strong thunderstorms that reached up to 50,000 feet tall. These thunderstorms then spawned tornadoes that caused widespread damage across Texas.

One resident in rural Powderly in Lamar County said she had sheltered in a closet with her boyfriend and cat during the tornado. “We felt cold air, and we felt the house shake, and we heard noises, and we felt the ceiling in the hall we were at sucked up,” a woman named as Tammy told the Paris News, adding that her property had suffered roof damage and shattered windows. “The beautiful trees are all gone,” she said. “It was terrifying. I was pretty scared.”

November tornado outbreaks are not as regular as their spring counterparts, but they’re not uncommon. The ingredients for severe thunderstorms and tornadoes typically come together in the fall, when warm, moist air from the Gulf of Mexico clashes with cold air spilling down from Canada. This can lead to the formation of strong low-pressure systems that can tap into that warm, moist air and spin it up into severe thunderstorms.

The National Weather Service Storm Prediction Center announced a level 4 out of 5 "moderate risk" for severe weather Friday afternoon. The red zone covered extreme northeast Texas, southeast Oklahoma and southwest Arkansas. It’s only the fourteenth time since 2002 that a moderate risk has been issued in November, underscoring the relative rarity of such a high-end event in the autumn.

As the severe weather system approached, forecasters were initially unsure of how likely it was that tornadoes would form.

There were a number of factors - like CAPE (a measure of atmospheric instability) and wind shear (a measure of wind speed and direction) - that suggested the potential for strong storms, but it was difficult to say if thunderstorms would merge and interfere with each other, or if a few discrete cells could tap into the atmosphere's full potential. In the end, the latter scenario played out, leading to a series of tornadoes across the region. Thankfully, thanks to advanced warning systems, most people were able to take shelter and avoid injury or damage. Some of the areas impacted are the following:

As the storms formed, a potent mid-level disturbance created a pocket of frigid air, low pressure and spin. This trigger ejected out of New Mexico and passed over the Texas Panhandle. Thunderstorms erupted along and ahead of a surface cold front, creating an environment conducive to strong tornadoes. The storms brought heavy rain, high winds and large hail to the area. In some instances, tornadoes caused significant damage to property and even loss of life.