A Quick Guide to Hail Storms: What Policyholders of All Kinds Should Know

Many homes, businesses, farms, and industries have been affected by damaging hail in this year’s storms, and—although the losses can be extreme—it isn’t all that uncommon. In fact, hail is responsible for an overwhelming number of insurance claims every year, making it one of the most costly weather events for policyholders and insurance companies alike.

Despite hail being a common cause of property damage, or maybe even because it is so common, many policyholders underestimate its destructive power. However, being unprepared for a hail storm could turn into a costly mistake. No matter what kind of property you own, here are some important things to understand about hail.

The National Severe Storms Laboratory (NSSL) explains that hail is created when water travels upwards inside a thunderstorm and freezes in the colder air at the top of the storm. As it travels back downwards and is blown upwards again, it melts and refreezes multiple times. Each “layer” of frozen water adds to the size of the hailstone until it is too heavy to remain in the air and 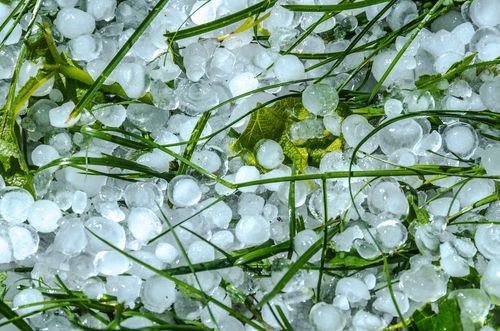 falls to the ground below. Hailstones can range from the size of a pea to the size of a softball or greater. According to the NSSL, the biggest hailstone on record measured a whopping eight inches across, more than 18 inches around, and weighed nearly two pounds.

Since hail is created in strong thunderstorms, serious hail storms are most likely to occur during the peak storm seasons in a given area. However, severe storms and hail are possible any month of the year and just about anywhere. In the United States, hail storms are common in every state, but they are most common in the region where the states of Nebraska, Colorado, and Wyoming meet—an area that the NSSL refers to as “hail alley.”

How Does Hail Cause Damage?

Hail causes damage as it gains weight and speed in the storm and comes crashing down on structures, vehicles, and properties. Its speed can increase with strong winds, which can also blow hail at strange angles—even nearly sideways in the worst storms. Of course, hail causes more damage the larger it is, but even small hailstones can cause property damage and losses on impact.

Although there are many different kinds of losses that can come from a heavy pelting of hail, hailstones can be especially damaging to:

Hail is also often accompanied by other damaging weather, such as high winds, heavy rains, and even tornados. While damages from the accompanying storm may also be covered under the insurance policies you carry, it can create confusion when claims for different types of damage must be submitted differently or to a different insurer.

If Insurance Claims for Hail Damage Are Common, Why Do Policyholders Have So Many Problems?

Almost every kind of property is at risk for damage in a hail storm. Even though insurance claims for hail losses are extremely common, the process of resolving a claim isn’t always easy or fast. There are numerous kinds of problems that can come up when you submit a claim for losses, but these challenges often arise because:

Do you have questions about severe hail damage or a claim for storm losses that has been underpaid or denied? For more information and a skilled assessment of your case, contact the Voss Law Firm today at 1-888-614-7730.