The National Fire Protection Association (NFPA) released an interesting report in April 2016, which looked at fire data from 2009 to 2013 for manufacturing and industrial properties. The properties they gathered data from included a number of different facilities, including manufacturing, processing, agricultural, utility, distribution, mines and quarries, laboratories, timberland, and more.

The data shows some important patterns and trends for fires on manufacturing and industrial properties, which often suffer large-scale losses when fires do break out. Attorney Bill Voss has worked with major commercial policyholders around the nation on fire insurance claims, and he would like to share some of the NFPA’s findings to potentially help you with your loss-mitigation planning for your own property. 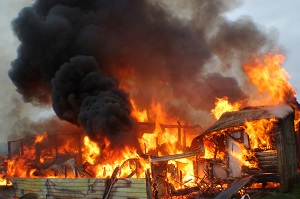 Statistics for Fires on Manufacturing and Industrial Properties, 2009–2013

In Fires in U.S. Industrial or Manufacturing Properties, the NFPA estimated annual data based on information from the U.S. Fire Administration’s National Fire Incident Reporting system and its own annual fire department experience survey. The following are some highlights from the report:

Although the NFPA data combines industrial and manufacturing fires in the report, the data did show that about 65 percent of structure fires took place on manufacturing properties. Overall, fires taking place inside structures accounted for the greatest losses, including death or injury and property damage. The NFPA estimates that structure fires were responsible for $704 million in direct property losses for these types of properties each year.

Losses May Be Similar, But Industrial and Manufacturing Fires Aren’t All the Same

Although looking at the statistical averages can be helpful when looking toward the future and the protection of your property, it’s important to keep in mind that not all fires are treated the same by insurance companies. Coverage for losses from major fires on these kinds of properties can vary quite a bit, depending on:

Find out more about how the cause of a fire can impact industrial property insurance claims.

Getting Help When Insurance Claims for Industrial or Manufacturing Fires Are Delayed, Denied, or Underpaid

Fires are responsible for large industrial losses every year, and many policyholders struggle to get a fair resolution from their insurance companies. The coverage for industrial and manufacturing properties is often very complex, and damages can be catastrophic. Fire insurance claims are sometimes delayed for no reason, unfairly denied, or shockingly underpaid, and it’s up to the policyholder to assert his or her rights and work toward a solution. If you need help after a large-loss fire on an industrial or manufacturing property, don’t hesitate to reach out to the Voss Law Firm at 1-888-614-7730.