Texas, Arkansas, and Missouri Among States Hit by Tornadoes and Severe Weather

Although tornadoes can form any time of year, the months of April, May, and June typically mark the peak of tornado season in the Mid-South and Midwest states. Unfortunately, this year’s peak season has proven to be active. On Saturday, April 29, 2017, severe storms moved over several U.S. states, leaving a tragic wake of death, injuries, and property destruction. Attorney Bill Voss offers more details on the recent storms here, as well as information about disaster resources and how to get help with related insurance claims. 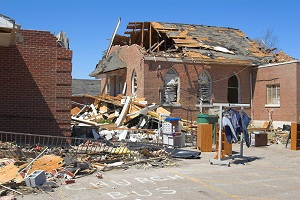 Tornadoes, flooding, heavy rains, and high winds resulted from the destructive spate of late-April storms, and approximately 50 people were hospitalized with injuries related to the severe weather. Buildings and vehicles were heavily damaged in some areas, and downed trees and debris were prominent reminders across affected communities on Sunday morning. The most destructive and dangerous effects of the severe weather system were felt in three states:

Several other states, including Florida, Louisiana, Alabama, Georgia, Tennessee, and Mississippi also saw severe weather or were under storm or tornado warnings as the system continued to move across the South and Midwest.

If you have been affected by the recent severe weather and need assistance, we have put together a list of disaster relief contacts and resources that can help you get back on your feet. If you have questions about filing your insurance claims or fighting insurance claim denials, you can also contact the Voss Law Firm directly for a free review of your concerns. Our attorneys have extensive experience helping policyholders with difficult insurance claims, including large-loss business claims, and we would be happy to answer your questions today.